A Personal Safety App in the palm of your hands.

While conducting competitive analysis I was able to form questions to ask our users what features they found necessary and brought those features up to our team to implement into our app.

This was in the days prior to balsamiq, figma, sketch etc.  My Prototypes & Wireframes were designed using power point showing the User Flow.  Later when the App was in the Beta stage, I did my own tests on Mapping to ensure we had the correct User Flow, prior to actual User Tests.  I critiqued the User Flow and if any issues were found, I discussed them with MD and we then had the Development + Software Team involved to fix those issues.

Next, after conducting Usability Tests I was able to validate key parts of the Design and Collaborate with the rest of the team on what I learned that we needed to add, what needed to be refined to the Design and Interactive elements.  This was the process for a while, until we came up with the final design and launched in May 2014.

UbnAppd was an app created to help prevent or deter a crime or incident.  By recording video and audio that uploads to the Cloud servers. Then alerts your contacts *you listed* within moments of the incident.  It also tracks the GPS location where it was recorded.

By the end of 18 months, the team had built an Interactive Prototype website and the app was now in Beta Testing.  I was working with a non profit group, SOSea *Social Outreach Seattle, located on Capitol Hill* during this entire time.  The groups founder, Shaun Knittel was my first persona / use case and then turned fundraising advocate.  When I first met Shaun, I shared with him what our vision was.  Apparently at that time, there were so many hate crimes happening on Capitol Hill and in the news that the Seattle Police Department had approached SOSea to come up with an app.  The SPD would help with funding the project.  Our app had covered more features than what SOSea had been working on, so we teamed up and worked together.  The video above, "In The Media" is reflecting my handy work with promoting media coverage *PR* for SOSea during our first major launch.  I had every media outlet involved in the coverage of that event.  The app launched publicly in May 2014.

This project proved to myself that I had more to give, share and learn than I had ever known.  Gave me the opportunity to experience working closely with developers, researchers, designers and engineers to move beyond an Interactive Prototype into an actual working app and website.  Gave me the opportunity to elaborate on Creative Content for Marketing flyers, Branding materials and Presentations to show consumers, affiliates and non-profits. 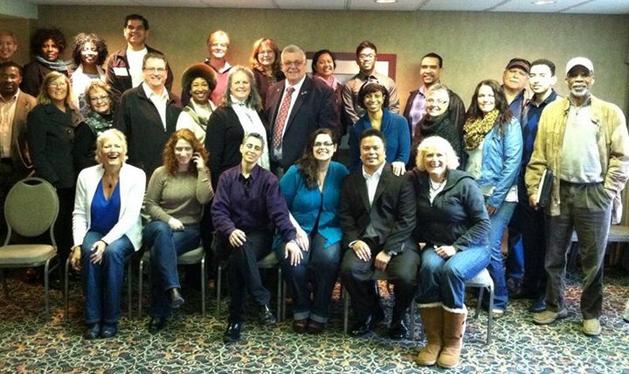 MD and The Original Founders

I wore MANY hats.  Investor and Created the Founders Group who's talents shaped this project.  As a Product Owner my specialties were Research, Marketing, Visual Design, Service Testing, Branding, Public & Media Relations.

Creating power points to present our prototype, conduct Service Testing; verify Hierarchy, Journey Mapping, link checks and search for possible bugs / issues. Next, would report to the CEO my findings or issues.

"This was truly my greatest accomplishment!"

The Team also know as The Original Founders, contributed significantly to the final product.  Various Users that had purchased the app have videos posted on YouTube. These videos show instances that they, *the User* had come across or how to use the app in certain situations.  The apps main function; If the user is in trouble, they can capture the incident by using the app and the video will be sent to their emergency contacts IF they do not shut it off within *set period of time*. Emergency contacts get a notification about *so and so* activated UbnAppd.  Videos and event updates are stored in a database and can be viewed from any browser.  The contacts can then go see video and GPS of where it was taken and decide if the police should be notified.

This was a great experience.  The project took longer than expected due to most everyone involved were working on it as a side project and not committed as a full-time job.  In the end, we learned that there needed to be more Angel Funding / Investors to keep this going.  This was truly my greatest accomplishment!

UbnAppd is an app that may prevent or deter a crime or incident.  By recording video and audio that uploads to the Cloud servers. Then alerts your contacts *you listed* within moments of the incident.  It also tracks the GPS location where it was recorded.